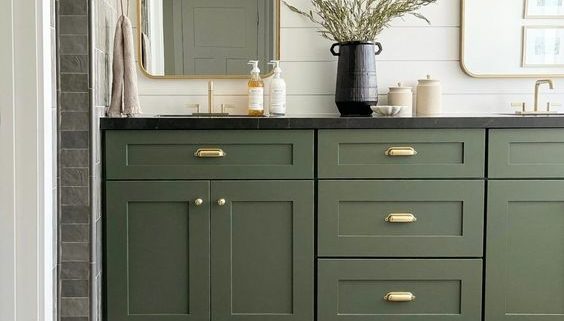 Who doesn’t dream of an updated bathroom? From lack of storage to a bathtub you’re hesitant to step into without sandals, renovations that bring bathrooms into the 21st century are high on the list of homeowner wants.

If you’re curious what the most popular bathroom renovations were in the last year, the 2022 Houzz Bathroom Trends Study was just released, and it’s an interesting look at both the trends and the rising price points that took over American bathrooms in 2022.

Sure, everything old is new again. But when it comes to bathrooms, homeowners are looking to ditch features that are outdated. In a survey of more than 2,500 respondents, Houzz determined that outdated style was the top trigger for bathroom renovations in 2022, with 48 percent of those surveyed saying it was their main motivation. More than three-quarters of homeowners (76 percent) upgraded their vanity cabinets during primary bathroom renovations. While 30 percent favored wood for their vanity, 14 percent went with a pop of gray, 7 percent chose blue, and 5 percent went with black.

Shower updates were also consistently popular, up two percentage points over the previous year with 84 percent. The survey determined that when removing a bathtub, nearly four in five homeowners enlarge the shower. And of course, the toilet is often a big focus. One interesting (but not so surprising) fact? High-tech toilets proved to be quite the draw for homeowners. Nearly two in five homeowners add high-tech features to their toilets, choosing bidets, self-cleaning elements, heated seats and built-in night lights.
“Bathrooms have always been a top room to renovate and we’re seeing that homeowners driven both by aesthetic desires and functional necessities, are doubling down on their investment in these private sanctuaries,” said Marine Sargsyan, Houzz staff economist. “While the cost of products and materials has increased due to inflation and supply chain disruptions, renovation activity remains strong, propped up by high home equity and homeowners’ desire to stay put given limited housing supply.”

As you’ve likely discovered while plotting out your home improvements, bathroom renovations are pricey. From buying the materials to finding the necessary labor to complete the work, it can be quite the expensive pursuit. The survey determined that the national median spend for primary bathroom projects increased nearly 13 percent to $9,000. For higher-budget projects, the average spend saw a 19 percent jump to $35,000. People doing “major” bathroom renovations (think full-on shower upgrades) spent a whopping three times more on their renovations than those undergoing minor renovations.

Another interesting point is the rising popularity of adding greenery to bathrooms. 88 percent of respondents said adding greenery “adds to the aesthetics of the room,” while 64 percent said it creates a more calming environment. 34 percent attributed the increase to plants’ air purification powers, while 7 percent like their odor-fighting ability. Another 7 percent went with antibacterial attributes.